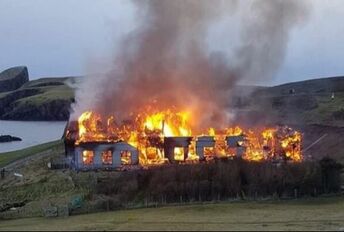 On Sunday 10th March 2019, a fire broke out in Fair Isle Bird Observatory. Thankfully, no one was injured in the blaze, but the building itself was completely destroyed. This has been an enormous shock to the community, and to the Parnaby family in particular.

​Bookings for the 2019 and 2020 seasons cannot now be honoured. More information is available on the FIBO website.

The president of the observatory trust, Roy Dennis, has vowed that the obs will be rebuilt, and anyone who wishes to support the observatory can make a donation at this page.
​

Plans for an innovative 24-hour renewable energy project in Fair Isle are now moving forward, after funding was received from Highlands and Islands Enterprise, the National Lottery, Shetland Islands Council, Scottish Water and others.

BBC One Scotland. Fair Isle: Living on the Edge

BBC One Scotland will broadcast the first of two hour-long programmes about Fair Isle on Monday 28 November 2016 at 9pm. The programme information is below.
​

Fair Isle is Britain’s most remote inhabited island and an extraordinary place to live. Situated halfway between the Shetland and Orkney Islands it can be cut off for days at any time of the year. There is no power at night and no pub and just one small shop.

Filmed over a year this intimate two part-documentary series, Fair Isle: Living on the Edge,captures a critical period in the island’s life. As narrator actor Steven Robertson, from nearby Shetland, says in the programme: “Once almost 400 people lived here, now there are just 55.”

It is a perilously low number on an island where all essential jobs are carried out by the hard working community, who are doing everything they can to increase their population and ensure their survival with a once-in-a-generation development plan.

Skipper Neil Thomson  - whose ancestors  have been on the island for over 400 years and lists his other jobs as crofter and musician - welcomes the new people; more than half of the 27 households are held by incomers. But he also adds; “Some people have come here to try to get away from life…but what happens here is that life is very much in your face. There’s nowhere to hide.”

The series begins with the arrival of a new couple – Shaun Milner and Rachel Challoner – the first incomers to the isle in five years. The ex-military thirtysomethings take on several jobs and learn how to manage their 25 acre croft and 24 sheep as they adapt to their new life together on the island, which is managed by the National Trust for Scotland.

Also in the first episode are Hollie and Deryk Shaw who have lived on Fair Isle for 15 years, raising a family of four. Like all parents on the isle, they have to face the fact that, when children finish primary school, they leave the island to board at secondary school on the Shetland mainland. Some families leave before the time comes to send their children off, but their love of Fair Isle means the Shaws want to stay, even as their youngest son, Ythan, prepares to leave home.

Such plans are not straightforward. Travelling to and from Fair Isle depends on the mercy of the weather, with a trip in an eight-seater plane or a two-and-a-half journey through turbulent waters the only ways to get on and off.

While highlighting many of the facets of everyday life that sets Fair Isle apart – from low population and facilities to being completely at the mercy of the weather - it is the islanders' personal stories which drive this compelling series.